Freedom of Speech in the Workplace

Connecting Your Systems to Work For You

What To Look For When Combining Systems 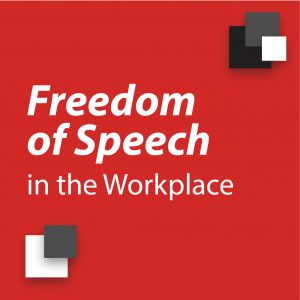 Everyone is entitled to their own opinion, right? What about when personal opinions cause conflict in the workplace? The First Amendment of the U.S. Constitution guarantees “freedom of speech” but how does that apply to the workplace? Can employees say or do anything they want in the workplace or do employers have the right to place some restrictions?

The First Amendment protects Americans’ free speech from intrusion by the Federal government excluding some specific situations. The U.S. Supreme Court has called the few exceptions to the First Amendment “well-defined and narrowly limited.” These include obscenity, fraud, true threats, defamation, incitement and speech that is “integral to already criminal conduct” (child pornography, for example). Shouting “fire” in a crowded theater is a popular analogy for speech that is not protected by the First Amendment.

Additional legislation has been enacted that applies only to public sector (federal, state and local government) employees and, in general, prohibits speech that impacts the government’s ability to effectively and efficiently fulfill its duties.

The First Amendment does not extend freedom of speech to the private sector. This means private sector employers have the ability to restrict what employees say, and in some cases do, in the workplace within certain legal guidelines:

So what may employers do? First, they should have documented and well-communicated policies, usually in an Employee Handbook, with consistent enforcement. These policies may include:

It is always better to communicate company expectations to employees before you have to address behavior that is disruptive to the workplace.

An HR professional can help you with this and all of your human resources needs. From hiring the right employees, running background checks, creating employee handbooks that include anti-harassment policies and procedures, and so much more, Next Level Solutions can work with you to provide the services that you need to run your business.